The latest Hearthstone expansion is here again. This time introduced by Hearthstone Game Designer, Dave Kosak (since Ben Brode’s departure, everyone’s wondering who will be stepping into his shoes) in one of the most cringe-inducing videos Team 5’s ever released. 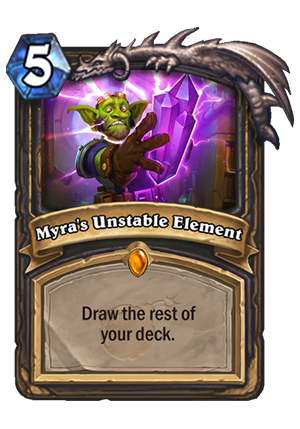 The Boomsday Project is the name of the new expansion and appears to be a return to the mech theme with one of the new mechanics being Magnetic. While the new cards are pretty cool, especially Myra’s Unstable Element, the most discussed issue on the forums and Reddit appears to be the new pre-order options.

I love Hearthstone and it’s pretty much the only game I choose to play these days. Despite being staunchly against paying for any form of mobile game DLCs following the loot box model before, I’ve since changed my stance but I still strongly believing in supporting game publishers who outright sell the complete game instead of trying to nickle and dime their customers at every opportunity.

In comparison with the previous offering from The Witchwood which was $50 for 70 packs and the expansion’s cardback, you’re essentially paying additional $10 for 10 packs, 1 Golden Legendary card (1600 dust?) and the exclusive Warlock hero portrait, or more bluntly a .jpg file with a couple of recycled voice lines.

With that said, I don’t have any skin in the game and I think it’s fine for Blizzard to try to monetize further with a purely cosmetic item which doesn’t have any impact on gameplay (aside from being tilted and intimidated by opposing Mecha-Jaraxxus’s emotes?). Also, you must agree that Mecha-Jaraxxus is looking to be really badass (I’m gonna be sticking with Nemsy for now f2p btw).