Have you heard of soCash? Me neither, until the other day when I was wondering how many ATMs does Standard Chartered has (not many), and I saw them having a whole bunch of locations marked with “soCash”.

A quick google search led me to an article on them from SBR which describes them as a fintech with plans to “disrupt” ATM machines by turning ordinary stores around the island into cashpoints. They have even managed to secure partnership with 3 major banks in Singapore: DBS, POSB, and Standard Chartered. Well just 2, DBS and POSB are essentially the same thing.

I love that local companies are coming up with innovative solutions to value add to our existing infrastructure and possibly make life easier for consumers but even though there weren’t any additional fees (as of now) I just don’t see soCash’s usefulness when you can actually already do so at several major retailers without another 3rd-party app and well, what’s wrong with ATMs?

Then I saw this; 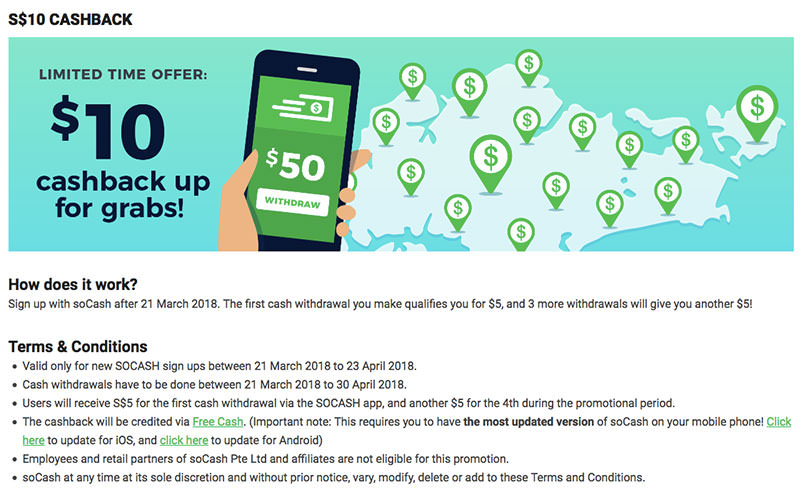 Free money! Just make 1 withdrawal via their app and they’ll give you $5 absolutely free with no strings (other than encouraging you to download their app and hopefully your continuing usage).

This is the point where I strongly encourage everyone to follow these 11 simple steps to get your free $5. No, this is not a sponsored post and soCash is not paying me to write this (but I wish they were).

I should probably justify (11) with some unsolicited advice to the soCash team.

When I approached the cashier at (7), it was an uncle and when I told him that I wanted to make a cash withdrawal with soCash, he was like “Huh? We only have GrabPay”. I had to point to the soCash sticker that was pasted beside the counter and a good 30 seconds before the cashier understood what I wanted to do.

So while it’s awesome you managed to clinch partnership with all the SPH Buzz kiosks, it’s imperative to ensure that your “partner” merchants are acutally training their employees on how to handle your transactions rather than simply throwing up a soCash sticker and call it a day.

My experience using the app was frustrating and horrible, while the free $5 was nice, I could have just gone to the ATM around the corner and got it done without any fuss.

Also, to even have a fighting chance at mass adoption, the soCash team should put in more effort in expanding their network of partner merchants asap. I saw this dude advertising in Toa Payoh MRT but when I launched the soCash, the nearest cashpoint was more than 500m away!