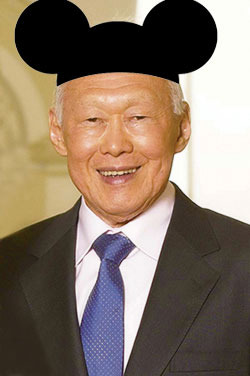 DISNEYLAND SINGAPORE: Disneyland May Be Built At Marina East

Walt Disney confirmed that Disneyland is in talks with the Singapore Government to build a theme park in Singapore.

Singapore Tourism Board says they are looking at all avenues to bring tourism growth into Singapore to achieve the 2015 Tourism target.

Disney says they are totally not interested in building a theme park in Malaysia, and has never started any negotiations with the Malaysians.

According to sources, Disneyland Singapore will be constructed next to Marina Bay Golf Course.

This piece of land is very near to the city. Across the waters will be the new Marina Bay Downtown. And facing the land is a unobstructed view of the sea. Behind the land is the high end Tanjong Rhu residential area. It takes less than 30 minutes to travel from Changi Airport to the potential site. And this piece of land is an exceptionally golden piece of prime land.

The land size the Govenrment will allocate to Walt Disney is still under discussion, but sources revealed that the size of Disneyland Singapore will be roughly the same as Disneyland Tokyo.

Disneyland Singapore will be a more compact theme park with some of its attraction built inside buildings.

As the Marina East land is next to the sea, Disneyland Singapore will most probably have a sea theme or a futuristic theme to it.

Analysts say that the Marina Bay Golf Course may be returned to the Government once their lease is up, so that Disneyland Singapore can begin construction of the second phase of their theme park.