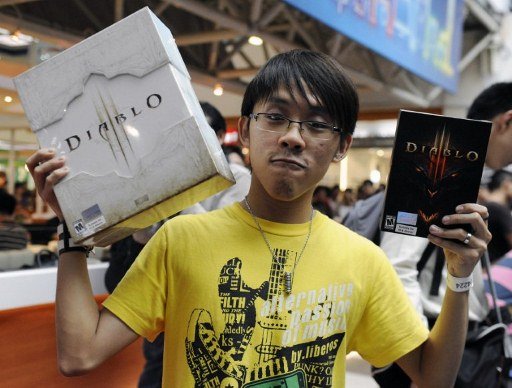 How many people actually bought the game because they’ve played Diablo, Diablo 2 and hence can’t wait to get their hands on Diablo 3 after waiting for its release for years?

How many people actually bought it just because they heard about it from friends and it seems to be one of the hyped up releases as of recent?

The accompanying commentary is fucking hilarious too. To me at least.

Clerk Seth Chan, 24, poses with his newly released copy of Diablo III and a collector’s edition for being the first in line at the videogame’s launch event at a computer mall in Singapore on May 15, 2012. Thousands of people queud outside the mall, many of them taking time off from work or school to grab their copies.

Why?? How many hours did you queue just to be the first Clerk? You could have easily pre-ordered them and start playing the moment it’s out, unless you were in it just to be photographed as the first then never mind.

A 60-year-old banker who declined to be named told Yahoo! Singapore that he has been playing games for more than 10 years. “Diablo has nice graphics and many interesting characters. I got a new computer that cost me a couple of thousand dollars just to play Diablo 3. I don’t think there are many others that still play games at my age.”

Well, Diablo 3 is not exactly top of the line in the graphics department. I know you are a rich banker and all but why the hell would you need to spend thousands of dollars just to play the game. No wonder he declined to be name. Pfft!

12-year-old students Darren Loo and Luke Hew said they joined the queue at about 3pm. Both students are avid fans of the game and have played Diablo 1 and 2.

You are 12 years old, you weren’t even born yet when the first Diablo (1996) was released.

You are 12 years old, was playing Diablo II (2000) the first thing you did when you popped out of your dear mother’s womb (Happy mother’s day)?

You are 12 years old, you have no business playing a ESRB M-rated game. And yet parents are always complaining about all the media violence and sex.