Member of Parliament Penny Low was caught using her handphone during the national anthem at the National Day Parade on Tuesday as a clip of her doing so went viral!

I was so caught up in the wonderful NDP 2011 and felt so proud of being a Singaporean, that i wanted to capture that moment of pride, at the very tail end of the anthem, to share on FB with my residents. If in my enthusiasm i offended anyone, please accept my apologies. NDP is a time to unite not divide. Majulah Singapura!

You know if she told everyone that she was actually doing something of importance or an emergency which required her attention I would probably be more forgiving but “TO SHARE ON FACEBOOK WITH HER RESIDENTS“?! Seriously?

Who the hell gives a shit about your every minute live updates on facebook when you can’t even demonstrate your respect for the country by standing still for a couple of minutes?! She doesn’t even have to really sing, just move her lips and no one will ever know. It’s not as if your fellow MPs will be turning around and posting on their Facebook “MP PENNY WAS JUST LIP SYNCING THE ENTIRE NATIONAL ANTHEM LOLOLOL” 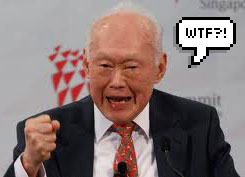