Ok, I found out that my mum saw me in a reading positon ( lying on stomach with story book still held in my hands ) and noticed I was sleeping when she realised I did not respond to her. hahaha. I found that amusing.

Anyway, Back to the topic and person on my mind-Zidane.

So what was exactly said to provoke Zidane? According to newsreports, the italian you-know-who-cheebye face did insult Zizou. But what he insulted remains unclear. However there are a few theories.

Evidence that Zizou was insulted (LINK)

Materazzi admitted he insulted Zidane before the France captain head-butted him, but denied calling him a “terrorist.”

“I did insult him, it’s true,” Materazzi said in Tuesday’s Gazzetta dello Sport. “But I categorically did not call him a terrorist. I’m not cultured and I don’t even know what an Islamic terrorist is.”

The 32-year-old Inter Milan player did not elaborate exactly on what he said to Zidane.

“It was one of those insults you’re told tens of times and that always fly around the pitch,” he said. 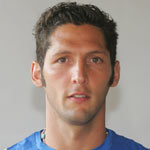 (eg of a cheebye face)
He was either insulted by being said he was a terrorist, his mother or sister was insulted. For your info, his mother  is very sick and his sister might be called a prostitute.

Zizou is the Best!

Let me propose a radical and hopefully feasible idea.

Let all the players wear a small recording device which records the sounds around you. So if another lan jiao italian provokes you and you headbutt him, the referee relies on the videos to ensure that there has been a foul and relies on the recording retrieved straight away to hear for any racists or personal insults. In this case, if there are mitigating factors, the player might be let off with a yellow card. This small recording device ( usage of nano technology largely required ) can be secured in the ears ( both ears cause italians are capable of sneaky stuff).

I bet the cheebye face was told to insult Zidane at the last 10 minutes. Think about it, intense pressure to score within 10 min and that seems like a good time to make anyone lose their head over insults they might have brushed aside if set in a different environment.

If I am taking my test paper now and has 10 minutes left with 2 long essays to complete and if you throw an insult at me during this time, I guarantee a flying chair and maybe some hair loss ( time to go yun-nan).

This display of headbutt Shows that Zizou is still human after all. Just like me. I got chance liao. 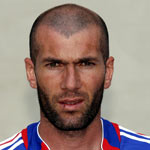 Anyway he still won the Golden Ball award. Congrats and you deserved the win unlike undeserving Italy.

He should have kicked the cheebyeface’s groin. I bet it hurts more there. And more useful than durex’s condoms.

Bah. Women are viscious and scornful esp me.

Intensely antagonized would be a good description of me.