Where the Truth Lies

Tonight went out with Miss Tee and Miss Lilac for our RA movie outing. The 3 of us will only watch RA movies with each other. Hahhahaa. It is quite hard to find friends as perverse as you. 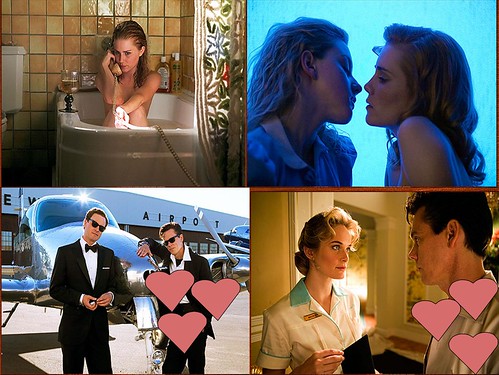 (paiseh for the heart signs cause I fell in love with kevin bacon after the movie.)

But despite the sex scenes, we must not forget that it is about a murder story. The 3 of us were left baffled as they switched between the different times. Half the time I was wondering who the narrator of the story was cause there was 2 main characters. Towards the end of the movie, things managed to fit like a jigsaw puzzle and I started to understand more. But Miss Tee is the smartest. SHe manages to catch most of it.

But poor Miss Tee was sitting next to an uncle who looks like an auntie in the dark. I worry about sitting next to guys who come alone to RA movies. I told Miss Tee to look out for sticky stuff just in case. Somehow the guys are uncles.

So I was telling Miss Lilac about going to chinatown to watch RA movies at dingy theatres. And I said that I will be wearing a poncho in there just in case the seats got certain residue or a jet-shooting fountain.

Question: How come the guys don’t need to bare all in RA films? Inequality of gender!!!!

and somehow I forgot what appointment I have on wed and with who. Shit.

Miss Lilac gave me a box of tim tams which I am going to finish tmr. hahaha.

Bookwise, I have finally finished the lincoln lawyer. Gist of the story is about a guy who thought he can milk his rich client who is innocent only to realise that he is being fucked in the ass by his client who actually killed his investigator, murdered a snake dancer and brutally assaulted a prostitute. Now my new book is ” The Frontrunner ” about some investment banking, hedge funds, derivatives and all sorts of jargon to confuse you.