Review of the new Cathay

Being the gian peng person I am, I decided last minute on the spur of the moment to catch a movie with Miss Pooh and sister if the timing is right.

A FREE MOVIE GIVEN BY CATHAY!!!

For the new opening of cathay near dobby ghaut.

The movie I was dying to catch V for Vendette was sold out the moment I reached. Hence decided on the INSIDE MAN cause they have actors and actresses I recognised. Better than the other movies I saw which are available.Jodie Foster! Denzel Washington! I have been out of the “movie loop” already. Did not read up on the current movies after Brokeback.

The New Cathy had very good airconditioning. At least that was my first impression. However when I returned to the place in the evening, the air conditioning seemed alright. Guess that there were more pple which brought down the temperature. 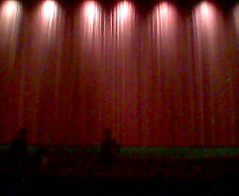 Inside The Grand Cathay! Looks very posh like a concert hall. I almost thought I was going to watch a play. 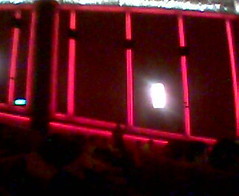 Nice decoratings at the side. The whole place on the whole looks elegant.

There were ushers on hand to help disoriented customers.

Service on the whole was good.

Now a review of the seats!

On the whole, alot of thought was put into this event. And it was a good marketing strategy! The whole place was packed when I caught the 950 pm movie. I bet they earned quite abit in the popcorn and softdrinks. People will be more willing to spend on that since they incurred nothing for the movie. Kaching! $$$$$$ rolling in, baby!

There were too little lifts however. I was almost going to hyperventilate in the lifts due to the extreme amount of pple inside. I am a little claustrophobic. So the best way is to take 6 escalators down.

However we incurred taxi charges cause it was past midnight. Nevermind, taxi fare is 5.50 each. Movie is supposed to be 9.50 but free. So we save 4 bucks!

On the taxi, I met with a chatty taxidriver. Of course I entertained him with my jokes. I am super nice to taxidrivers cause I think they have a hard life. 90 bucks rent for the taxi plus increasing fuel prices. With difficult customers who think that the taxidrivers are their personal ah-mats.

Anyway, we saw a Rolls Royce. Wow! But sadly I never get to see the person in the rolls royce. 🙁 I like to peek into expensive cars and see the owners cause I will capture a picture of their face with my brain to do extensive categorising of people. I was so good at it that with one look before the person even utters a word, I can guess with 90% accuracy whether the person stays in private or hdb housing. My brain is categorising pple with expensive cars now. So that I can identify them within 1 km away. hahahhaha. I am bo liao.

Once in 4 years leh.

4 years ago, I shook my MP’s hands when he visited my flat. 4 years later, I am looking forward to shaking his hand again. So I must stay at home more often now.

Ohyah. Forgot to mention abt the movie the Inside Man. Movie is not bad. About the perfect bank robbery. The robbers are ingenious. They made everybody dressed like them so they can pretend to be hostages too. Smart right?

I was so looking forward to having a break. I need leisure. There is too much madness carrying on right now. I need to breathe. However only with all this madness, I can truly appreciate and know what leisure means. Something like the you need something bad to know that something is good kind of theory.

PS: entry written with me half zzz