Went out on thurs for some cny dinner with Ocean’s 11 at Irene’s House which we always go every year. Her house is the best although we stay so far from her cause 1) she don’t mind preparing for the food 2) her house is huge and can accomodate us all 3) she got a maid to help her clean up

And she prepares damn good food. There is cheese sausages and cheese toufu which is super damn nice cause the cheese melts in your mouth. As usual, we have the grill to cook the chicken and sting ray and a steamboat. Mr Fag was sitting beside me and he was cooking the chicken and the sting ray. The poor guys in our group have to be slaves to the rest of the girls. Wahaha. Lucky thing is only there are 3 poor guys. Bad thing is that they have to work harder to slave for us.

As usual with every year, the girls will rest at the living room while the guys will wash the dishes. It is quite amusing to see role reversal but hey, the females are the majority and there is something known as the power of expropriation.

And we had yu sheng. I ate my only steamboat and yusheng at irene’s house. 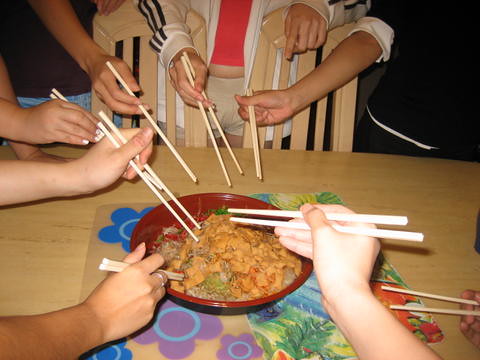 I somehow liked this outing compared with other dinner outings we had. Maybe it was like the good old days of crashing over at Irene’s house where we had sleep-ins. And there was definitely alot of laughter that day.

I was saying that life has been so hectic right and I am suffering. Yesterday was the ultimate! I left my house at 8 am and came home at 1 am. I was working the whole time and my brains was overworked.

I was cabbing home that day and this is the most dangerous cab drive I ever had. When he drive, he don’t put his hands on the steering wheel. One arm will be slung across the front passenger seat while the other hand was resting at the back of his own seat.

That is fucking dangerous lah. What if he cannot swerve the taxi in time? And he was speeding at 110 km/h at times. The 3 of us at the back was swaying badly and I even had to steady myself by gripping the top handle of the taxi. And I started to have motion sickness in that cab. Motion sickness was something I last had when I was in primary school and this taxi driver bought back all memories of puking in cabs.

Miss Pooh at one point in time told the cab driver to drive a little more slowly. I was praying for our lives in the cab at that time.