Have you heard of Sudoku?

Sudoku is a puzzle involving numbers and logical thinking. The rules are simple, fill in the grid so that every row, every column, and every 3×3 box contains the digits 1 through 9. But the puzzles are anything but simple.

I found a Sudoku puzzle posted on Flickr, instead of numbers, My Little Rascal uses the letters, S-I-N-G-A-P-O-R-E. 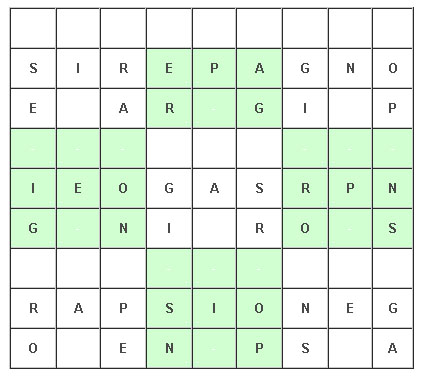 This is considered easy. However, after you think and cracked your brains and still totally have no idea how to solve this, check out the Flickr page, the answer is in the comments.

You may also want to give Web Sudoku a look. They have plenty of free Sudoku puzzles online where you can print them out and solve on your own free time. Oh, and on other Flickr, Sudoku news, here’s Flickrsudoku or “hamster sudoku”. Suduko utilizing Flickr, except with hamsters. Freaky but very neat.

Addendum: In Singapore, Sudoku is Logic9. Play it here: